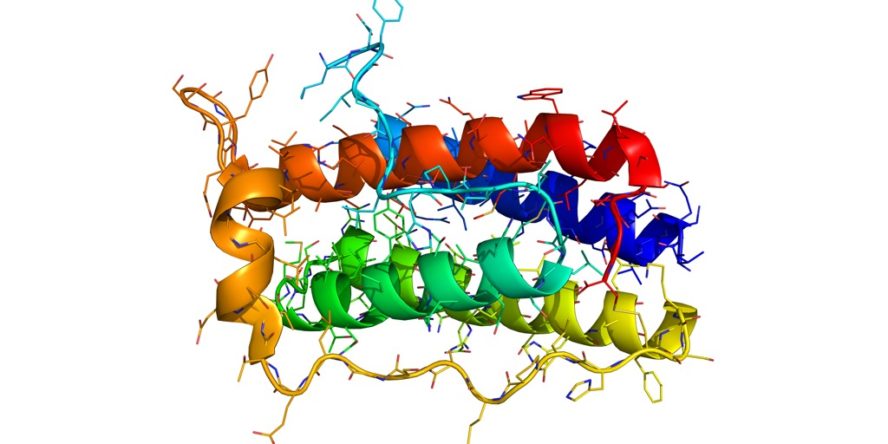 My initial interest in distributed computing was most likely triggered by my work with ElectricImage Animation System. It uses a network rendering engine called Renderama, which allows a large computer animation rendering job to be completed by any number of computers you have to throw at the job.

I think I next heard about people joining the SETI@home project, but that did not interest me much, as the probabilities of there being life elsewhere in the universe are staggeringly slim. If I were going to throw computing power at something, I wanted there to be a reasonable chance of it counting for something.

Then I ran across Stanford University’s Folding@home efforts. As it says on their website, “Help Stanford University scientists studying Alzheimer’s, Huntington’s, Parkinson’s, and many cancers by simply running a piece of software on your computer.” 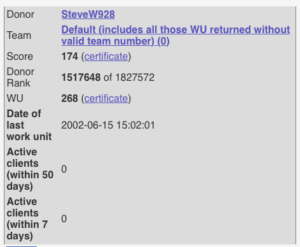 When I started in 2002, getting everything setup and running properly was a bit challenging, as it required having files placed correctly and a bit of command-line work. My statistics page lists June of 2002 as the point where I switched from solo-folding to a team, so I’m guessing I started in January of 2002 (possibly even December of 2001) to reach the number of submitted work units by June.

The Wikipedia article on protein folding explains it like this:

This results in various diseases and allergies. Hopefully, if the reasons for the misfolding can be discovered, it might lead to cures. We’re basically running computer simulations to try and cover all the possible ways a protein can fold. Since there are a lot of proteins to examine, an extreme amount of possible ways they can fold, and a lot of computing power required to model each possibility, distributed computing is the only real answer.

You can read about some of the results and objectives on the papers section of Stanford’s site.

In June of 2002, I discovered there were actually a number of teams competing for fun, comprised of individuals like me, implementing one or more computers towards the project. I found Team Mac OS X which had a community forum, providing information and friendship within the very large Folding@home community. I was pretty hooked.

Over the years, I’ve had anywhere from one computer, to maybe a dozen or so contributing to the project. While my numbers are kind of small in the big-picture, it all helps. And, over time, I’ve reached a ranking of #86 on Team Mac OS X (I’ve been much higher at points when I had more computers running), and am currently ranked 10,400 in the world (out of ~1,827,278 contributors). Not too shabby. 🙂

It’s now super-easy to contribute. On the Mac, it’s just an installer and a ‘control panel’ web URL, or I think there are even Chrome extensions that can run it directly in a browser window. I’d install it though, as you’ll want to just let it run in the background.

If you’re interested, just head to Stanford’s site and get going. However, I have a few tips and warnings from years of folding experience.

Folding (or any kind of distributed computing) is probably going to try and maximize output, or at least offer that kind of functionality. The problem is that many computers aren’t designed to run all the CPU or GPU cores 100% 24/7. That’s more the kind of thing servers, workstations, or pro machines are designed to do, which is why they often cost considerably more money.

To put it another way, for many consumer computers, it would, IMO, be a good idea to limit the amount of CPU/GPU that Folding@home can take. You’ve been warned!

While it is designed to ‘get out of the way,’ in that it runs at a lower process priority, that’s not enough. (if you’re running it, and then start up some other app, it will reduce it’s usage to allow the other apps priority) Via the web control panel, you can set it to ‘Light’ which I’ve found uses ~50% of the CPUs. I’ve been running it 24/7 on my iMac for years now, and it hasn’t caused any problems.

That said, if the weather got extremely hot, it might not be a bad idea to shut it down for a bit. And, when I’m doing something else that’s highly CPU intensive (like encoding video, 3D rendering, etc.) I do typically stop the folding. That’s super-simple to do via that web control panel. I just keep it bookmarked. Also, if I’m doing something really mission critical, I tend to quit everything but the app I’m using, which would also include folding.

If you start folding, you’ll probably want to keep track of your progress or your team’s progress. There is an incredible site by Extreme Overclocking that displays this data in any number of ways, even including projected overtake data. Here is Team OS X and my (SteveW928) data on that site. 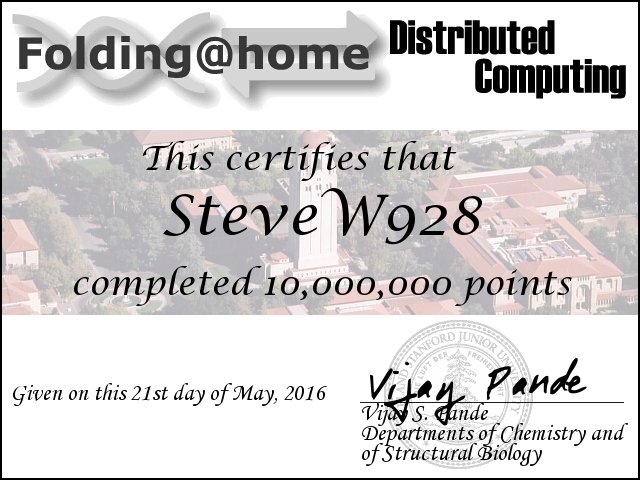