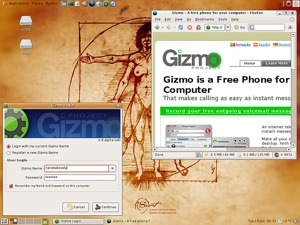 Ok, this is a bit of a rant, but might also help out some stranded Gizmo5 clients.

A couple weeks back, I received an e-mail that Gizmo5 services were being shut-down, and that I would have to transition my account to Google Voice, or get a refund on any remaining credit. I was expecting this to happen eventually after Gizmo5 was bought-out by Google, but was a bit surprised at the quick time-frame once announced (about a month). I’m pretty busy right now finishing up my graduate degree, so I really didn’t want this on my plate as well. However, I really had no choice, or we would have lost our phone numbers and been out of business on our phone service.

I’ve been using VoIP phone service since around 2005 when Gizmo Project first got going. We’ve been pretty happy with it in general. It has been flexible for us, as well as saving us money. For example, we’ve been able to keep the same phone numbers for several years, even across several moves. When we got to the ‘new place,’ we only needed Internet service, and everything was up and running again. It allowed us to capture voice-mail as audio files and e-mail them to members of the family. We’ve been getting our calls for around $0.019 per minute or less (sometimes free). About the only down-side is either no-911 service or e911 service, but we always have a cell phone or two around for emergency anyway.

I was a little sad to see Gizmo5 go after all these years. Their support was OK. It took a bunch of monkeying around to get it going initially. We have used an ATA hardware device, which allowed normal phones to be plugged in and used. Once setup and configured properly, though, it has been little different than using a traditional phone. We’ve even been able to have a US and Canada phone number that ring the same phone, which is handy since we now live in Canada but have lots of friends and relatives in the US.

Moving to Google Voice is a WHOLE different story! First, Google seems to have just shut down Gizmo5 support. This is kind of inconsiderate, given that people might need some help with the transition or porting numbers to other services. To make matters worse, it seems Google Voice support is also nearly non-existent. I’m guessing you can get a kind of ‘self-help’ support through their forums, if you can get to them.

First, I had trouble even figuring out what the heck Google Voice is. I have a friend who has used it and told me a bit about it, or I’d certainly be lost by looking at Google’s web site. It just seems to be this Internet calling thingy that may or may not be connected to calling phone numbers, etc. They use a lot of terms for the ‘features’ that make it sound impressive, but I haven’t really figured out anything it can do that most VoIP providers do not.

Second, since I’m in Canada, I couldn’t even get into the Google Voice forums or create an account to see what the heck was going on. I decided to get a refund on my credits, and attempt a port of one of my numbers, but it was a blind move. No support, and no way I could see to get support. I spent an hour one day just trying to see if I could get into their support (I’ve got several ‘Google Accounts’ now, but all failed). I think they must be blocking by IP. In other words, if you’re not in the US, you can’t get anywhere in their support system!

As an aside, if Google support is this horrible (and I’m not the only one who has complained about it… Google doesn’t seem to be known for their customer service), how well does this bode for Android users? Maybe ponder that a bit before you make your decision against getting an iPad or iPhone!

Enter Callcentric! Luckily, I had been experimenting a bit with Callcentric previously on my iPod Touch. I had purchased a Canadian dial-in number for it and was making calls from school and such with it. My experience with them was excellent. Their support was extremely responsive (within minutes sometimes)! Their documentation was very good for setup. Their on-line system for settings, call routing, phone books, reporting, etc. was all excellent! About my only complaint about them, is that their voice-mail system seems a bit outdated, however, it still allows me to route my voice-mail messages to e-mail and deliver them as MP3 files. I’m happy!

So, I was able to port my Gizmo5 number (Canadian) to Callcentric, and decided it wasn’t worth my time or money to try and get our US number out. Callcentric was also running a special on US dial-in numbers, so I just picked one of those up. The experience has been very good, other than maybe wasting about 1/2 to 1 day messing with Google Voice and porting the numbers. It only took me a few hours to get everything going and setup on Callcentric. Interestingly, even Callcentric tech support had to come to my rescue on porting the number, as Gizmo5 didn’t provide me with the docs I needed to authorize the port. Since Callcentric had helped other Gizmo5 people, they were able to point me in the right places to get the info I needed.

Also, if you are wondering why I didn’t mention Skype, it is because Skype doesn’t offer numbers in Canada. Also, Skype is a proprietary VoIP service which isn’t based on the SIP standard. You really want to be SIP based if you want to work with regular software VoIP clients, or standard VoIP hardware. I have nothing against Skype, and use it quite a bit, but IMO, it is a different kind of thing. One thing Skype is really good at, is punching its way out of networks to get a call through. I use both SIP clients and Skype on my iPod Touch when mobile. If I can’t get a call out with the SIP software, I usually can with Skype.