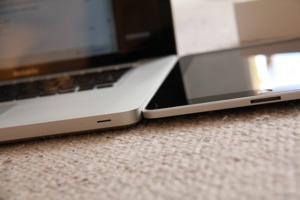 In a previous article, I asked this question and listed some of the benefits of a tablet, yet also expressed some concerns (though I felt the answer would be yes for myself, as well as for many people). With the introduction of the iPad 2 (or iPad2) and all sorts of other improvements since then, I decided to do a ‘revisit’ article. 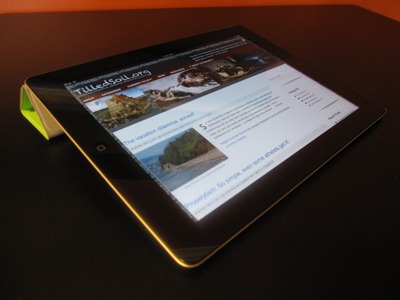 The iPad 2 is said to have kept similar battery life. That is exceptional given the speed increases and even smaller size and weight. It was critical to me, though, that they do so. I wouldn’t want a device that dropped much below 10 hours. This is one of my biggest reasons for wanting to get away from the laptop. I was just at another all-day conference recently, where I was stuck in back corners to keep my laptop powered.

I noted last time that my current MacBook Pro with power brick weighs in at over 7 pounds. Also, since the last article, Apple has released the new MacBook Air 11″. It is one heck of an impressive machine, I must say! It makes the choice much harder. Still, even with a bluetooth keyboard, the iPad weighs less (and gets several more hours of battery life)!

AllThingsD had the following to say about the battery life from real-world testing:

“Also, the battery life, while very good, isn’t as strong as I found it to be on the first iPad. In my tough battery test, where I played full-length movies until the battery died, with the screen brightness at about 75% and both Wi-Fi and cellular radios running, the iPad 2 just barely exceeded Apple’s claimed battery life, dying after 10 hours and nine minutes. That’s 2.5 hours better than the Xoom did on the same test, but more than an hour less than I got from the original iPad, which clocked in at 11 hours, 28 minutes.

On the other hand, in mixed and non-constant use, with the screen set to turn off when idle for a few minutes, the iPad 2?s battery life was impressive. It easily went 48 hours between charges, even while downloading hundreds of emails and dozens of apps, songs, and books. During this period, I played a few light games, viewed photos, briefly streamed some video clips, read newspaper and magazine articles, consumed several chapters of books, frequently checked Twitter and Facebook, surfed the Web, and made a few video calls.”

This is PLENTY good enough to make me happy! Read the previous article for some of the other reasons I really like the tablet concept over the laptop while mobile.

Do my downsides still apply?

CPU power – Last time, I worried about CPU power. While still not matching a laptop, the iPad is closing the gap. From what I’ve been reading about it, it closes it enough to do laptop type things (Consider Apple’s iMovie and Garage Band now on the iPad). I really think for most people, this distinction between a tablet and laptop is going to be a non-issue. I like to do things like play guitar and keyboard effects in a live band, and it looks like the iPad is certainly up to that task! Bottom line: the iPad 2 has the computing power for most tasks. The more realistic question would be if there is an app to do what you want, and if the touch interface is efficient enough to get your job done in that app.

Interface I/O – It doesn’t have all the connectors a laptop does, but with more things moving to cloud storage (I have been as well), this has really become more of a non-issue for me. On the plus side, the iPad 2 now hooks up to HDMI with an improved adapter which allows the normal dock cable as well.

Storage – it still doesn’t have the storage of a laptop, but again, see the cloud point above. This will be an issue for some people who want to stuff it with movies and other media, but I’d say that overall this need is decreasing. (I’m planning on getting the 16 GB at the moment anyway.)

Camera – There are now cameras, both front and back. While not as good of quality as one might wish for, they really fulfill this need for me, and I’d guess, for most people. Video conferencing is the big one. The only reason I’d really like more pixels for the rear camera is to be able to ‘scan’ and OCR books while doing research at the library. I suppose some would like it to be a better still camera as well, but I just don’t really consider phones, tablets, or laptops to fulfill that role very well. I’ll just bring the pocket-camera along when I need that.

Multi-tasking – while some might argue the way to switch apps isn’t good enough, Apple really came through on this point with OS updates (applies to iPad and iPad 2). While it still doesn’t have OSX or Windows like multi-tasking, I’m not sure for a mobile device with touch interface, that this is a big deal. I’d personally WAY prefer the battery life that this scaled-down multi-tasking provides. The screen also isn’t that huge, as to have lots of windows up side-by-side. (That said, there is probably a big market for ‘combo’ apps, like a good note-taking app with browser in a kind of split-screen. Think apps that people commonly work between, where not having to switch would be an efficiency gain. My example is an obvious one! Hint hint for any developers out there!)

Other reported downsides from last time:

No handwriting recognition – still a non-issue in my opinion. There are some great apps though that do interesting stuff for note-taking or drawing.

Lack of 4G – this is still an issue, I guess, for some people. As I said last time, I’d probably do the cellular with a separate box like a MiFi if I need it. I’d like to have just ONE contract that serves all my devices, as well as the option to simply upgrade speed or contracts without buying all new devices.

Lack of Flash – It might be an issue for some, but for the most part, a non-issue. There has been a major shift away from needing Flash, and that movement is just getting going. Also, Skyfire and CloudBrowse can access much of Flash content and apps, if you really need them. Consider:  In Two Years, Most Of You Will Be Reading TechCrunch From An Apple Device or MeFeedia Reports 63 Percent Of Web Video Is HTML5-Friendly or Disney acquires gaming engine startup to build HTML5 games outside of App stores

So, can it replace my laptop?

It certainly can for me, so long as I also have access to a desktop at home or office. I think most people would be in a similar situation. If you are a power-user, then probably not. If your job requires very specific OSX or Windows apps, used heavily, than no (remember that you can remote-desktop to your OSX or Windows box for occasional desktop stuff). If you require a lot of screen space while mobile, than no. Photoshop or CAD professional, probably not.

I think the iPad is capable of doing what most people need to do while mobile, and in some cases, do it better than a laptop. In other cases, it might be a bit harder, but some of the advantages of the iPad might make up for it.

My hope is that Apple does a serious upgrade of the iWork line. Pages still doesn’t have footnotes. Keynote still doesn’t have remote control or support presenter notes. One big thing to note is that iWork for iOS is only partially compatible with iWork for OSX. Shame on Apple for not either a) being more aggressive on fixing this or b) making it WAY more obvious! If you exchange docs between iPad and desktop and edit on both, you’re likely to lose aspects of your document. While this can be worked around, it should be noted and considered in your workflow. For example, I’d simply generate my Keynote presentations specifically for the iPad, as this is where I’d be presenting them from anyway. In Pages, I’d write with in-line notes, and then move them to footnotes if I were going to publish the document.

If you are considering a similar move:

Look for ‘show-stoppers’ as well as inconveniences. This will help you decide.

For example, here are some personal issues that I thought of:

Some of the benefits:

Have you ever tried to lay in bed with a laptop to read or even relax on the couch? I’m doing more and more of my reading and research with e-books and Kindle these days.

Getting a tablet out in many social situations is much less intrusive, socially, than a laptop. You also don’t have to necessarily need a place to set it. It would be MUCH easier to use while riding public transit. You could even put an iPad in your recipe stand while cooking!

I still see it as an advantage in a family, where you could have one more powerful desktop with multiple accounts, and then iPads for individual use (which is cheaper than multiple laptops).

Some interesting apps and accessories I ran across:

All in all, I’m a go for replacing my laptop with an iPad come March 25th (here in Canada). Now all I need to do is find the $.

I ran across this blog by Anthony Moody who is actually using his iPad exclusively, and is blogging on that exact topic! iPad Alone: Living with Apple’s iPad and *only* Apple’s iPad

I am WAY overdue on writing up a Part 3, as I’ve now owned an iPad for well over 2 years (as you can see in the attached photo above with my TilledSoil.org site on the screen). I have replaced my laptop with it (at least until recently… you’ll have to wait for Part 3 to see why). I have a bunch of insights to share. I just need to find the time to write it. 🙂 I would also modify that list of accessories and apps, as I don’t believe I use any of them. Many of them still look nice, but I’ve found other solutions that fit me better.