A friend of mine has been using a Plantronics .Audio 770 headset with his Playstation3 and has been quite pleased with it. I was not only unable to find one locally, but the cost on what I did find was more than I wanted to spend. My friend and I schemed a bit and came up with the following solution (cost ~$29):

These seem to range from $10 to $40ish. I picked mine up from FutureShop here in Canada for $19 on a Boxing Day special… but many retailers seem to have them for about that amount as their regular price. (1)These might be hard to find now, but weren’t when I wrote the article. Hopefully other inexpensive solutions are available. If you know of one, please let us know in the comments.

The only problem with these are that they are an analog only headset (basically missing the USB adapter of the more expensive Plantronics models). However, we found the following which works very well:

Syba SD-CM-UAUD USB Stereo Audio Adapter (Link to an example of this adapter on Newegg…) I picked one up locally at NCIX for like $10, but Newegg has them for $9. You might  find them at a local store to save the shipping, but I couldn’t believe the price. It works great with the PS3.

As you can see in the first photo (see: Headset Wiring), I have plugged the Syba adapter into a USB extension cable, and the pink plug of the Plantronics into the pink plug on the adapter. 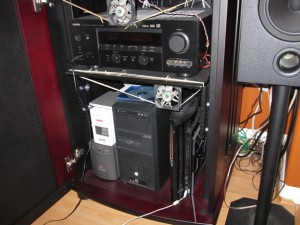 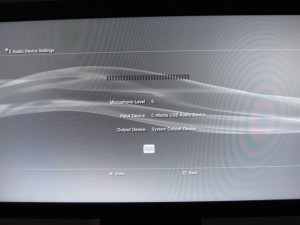 Now, just set the PS3 settings properly (see: PS3 Audio Settings). I put the mic level at 4 or 5. Set the input device to the Syba adapter (C-Media USB Audio Device). Set the Output device to the ‘System Default Device’. This runs the voice you’d normally get back through a headset to the same place as game sounds… which all end up coming into your Plantronics headphones.

The .Audio 370 headset sounds pretty good and works incredibly well in games, IMO. You should be able to use any PC headset with this adapter… of course sound quality and mic quality will vary.

So, I basically have $29 invested in this setup. Not bad at all for the high quality level. (2)This is an article I posted on the PS3 forums on 10-20-2009 (I modified it a bit to update things). It is kind of buried there, and I have friends with new PS3s thinking about setting this up. Enjoy!